When has Betsy DeVos ever praised the state of public education in the United States even after she has been the top education official in the country for over three years?

Not ever. And she probably never will.

But this comes from the person whose confirmation hearing when selected for her post was not only a disaster but proved to all education experts that she had absolutely no idea about education. In that hearing: 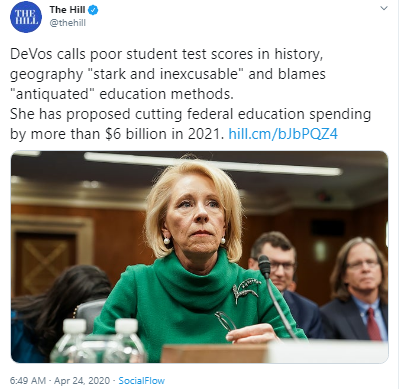 From that very report from The Hill:

Education Secretary Betsy DeVos on Thursday expressed her displeasure with the U.S. history and geography test scores released this week as part of a report from the National Center for Education Statistics (NCES).

The 2018 assessments — administered to 42,700 eighth graders in 780 public and private schools across the nation — showed a drop in both U.S. history and geography scores, while civics scores stayed the same from 2014.

“The results are stark and inexcusable. A quarter or more of America’s 8th graders are what [the National Assessment of Educational Progress] defines as ‘below basic’ in U.S. history, civics and geography,” DeVos said in a statement.

Interesting that many of the students tested in this sample were not public school students or that many students do not have an in-depth knowledge of many things on the test because those topics may only be glossed over in the curricula that varies across the country.

It’s also funny how her solution to this “problem” is divesting from public education. But even DeVos talked about her “fear” of public schools. Remember the 60 Minutes interview with Leslie Stahl in March of 2018?

Below is a transcript of a segment.

Lesley Stahl: Okay. But what about the kids who are back at the school that’s not working? What about those kids?

Betsy DeVos: Well, in places where there have been– where there is– a lot of choice that’s been introduced– Florida, for example, the– studies show that when there’s a large number of students that opt to go to a different school or different schools, the traditional public schools actually– the results get better, as well.

Lesley Stahl: Now, has that happened in Michigan? We’re in Michigan. This is your home state.

Lesley Stahl: Have the public schools in Michigan gotten better?

Betsy DeVos: I don’t know. Overall, I– I can’t say overall that they have all gotten better.

Lesley Stahl: The whole state is not doing well.

Betsy DeVos: Well, there are certainly lots of pockets where this– the students are doing well and–

Lesley Stahl: No, but your argument that if you take funds away that the schools will get better, is not working in Michigan where you had a huge impact and influence over the direction of the school system here.

Betsy DeVos: I hesitate to talk about all schools in general because schools are made up of individual students attending them.

Lesley Stahl: The public schools here are doing worse than they did.

Betsy DeVos: Michigan schools need to do better. There is no doubt about it.

Lesley Stahl: Have you seen the really bad schools? Maybe try to figure out what they’re doing?

Lesley Stahl: Maybe you should.

Betsy DeVos: Maybe I should. Yes.

It’s that “but your argument that if you take funds away that the schools will get better, is not working in Michigan where you had a huge impact and influence over the direction of the school system here” part that seems confusing in light of what DeVos said this week about cutting federal spending on public education by $6 billion.

But consider who she works for and how well he might do on a standardized test in science. 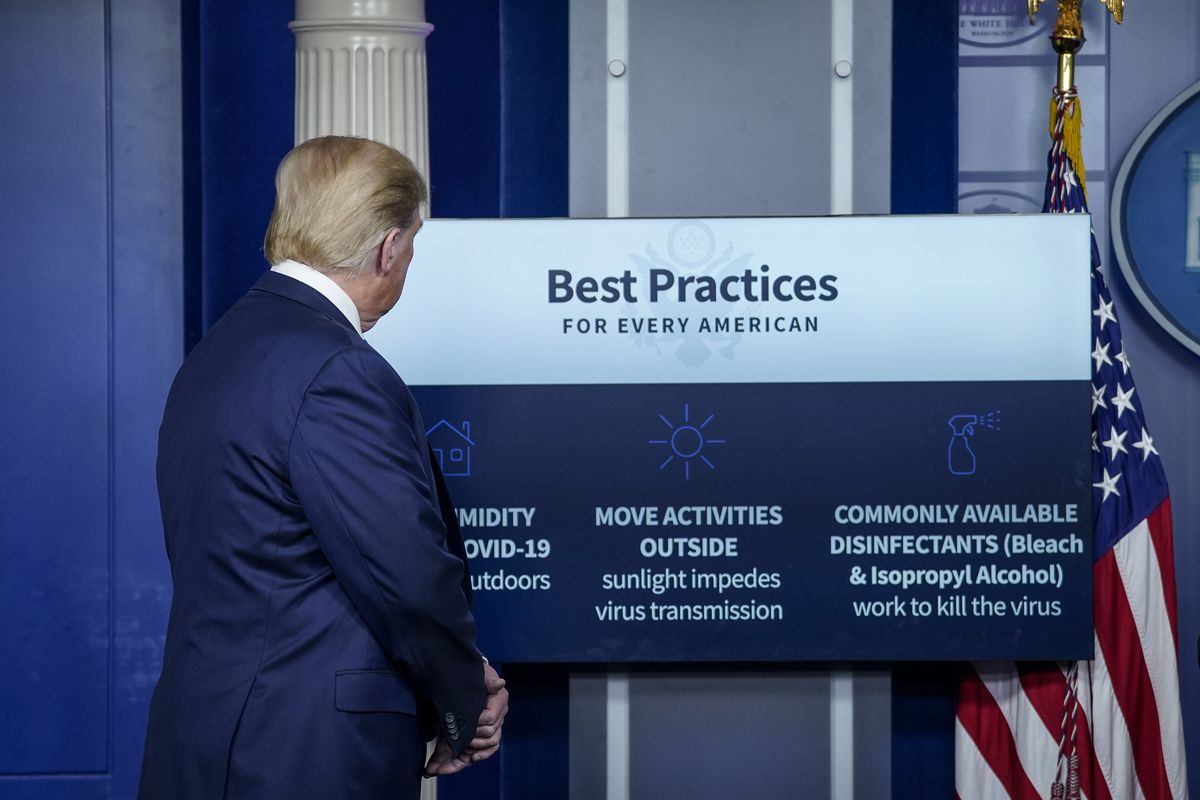 “Supposing we hit the body with a tremendous, whether it’s ultraviolet or just very powerful light … and then I said supposing you brought the light inside the body, which you can do either through the skin or in some other way. And I think you said you’re gonna test that. And then I see disinfectant, where it knocks it [coronavirus] out in a minute — one minute — and is there a way we can do something like that by injection inside, or almost a cleaning. Because you see it gets in the lungs and it does a tremendous number on the lungs, so it’d be interesting to check that. So, that you’re going to have to use medical doctors with, but it sounds interesting to me.”