Alex Granados of EdNC.org reported on it in his recent report “New education organization brings Jeb Bush to town.” He opens,

Grow Great NC, Inc., a new group focused on education reform, kicked off its first official day as an organization yesterday by bringing former Florida governor and presidential candidate Jeb Bush to town. Bush took part in a question and answer session with state Superintendent Mark Johnson at the City Club in downtown Raleigh, and spent much of the time highlighting his state’s educational achievements and congratulating North Carolina leaders on taking Florida’s lead.

“There are 50 state Senate presidents in the country,” Bush said to Senate President Pro Tempore Phil Berger, R-Rockingham, after the senator introduced him. “I can’t think of one who has done more for education reform than you” (https://www.ednc.org/2018/06/27/new-education-organization-brings-jeb-bush-to-town/).

Grow Great NC will garner its own post at a later date, but it is funny to think that the state now has Grow Great NC and BEST NC working separately. Now we as a state can be best and great at the same time!

Ironically the picture associated with Granados’s piece shows Bush and Johnson at a table with water bottles. If you as a teacher with just three years of classroom experience were at that table with Bush and Johnson, then you would be the most informed person to talk about public education.

But those school performance grades are helping advance a politically partisan effort to privatize the North Carolina public school system.

After the last couple of disastrous budget proposals for public education by the North Carolina General Assembly, it takes a lot of eyes to sift through the muck and make sure that all deficiencies are identified and brought to light because those who made this budget did so behind closed doors without political discourse and with partisan agendas. PSFNC.org is invaluable in that respect.

Public Schools First NC tweets this graphic every once in a while to remind us about the school performance grades: 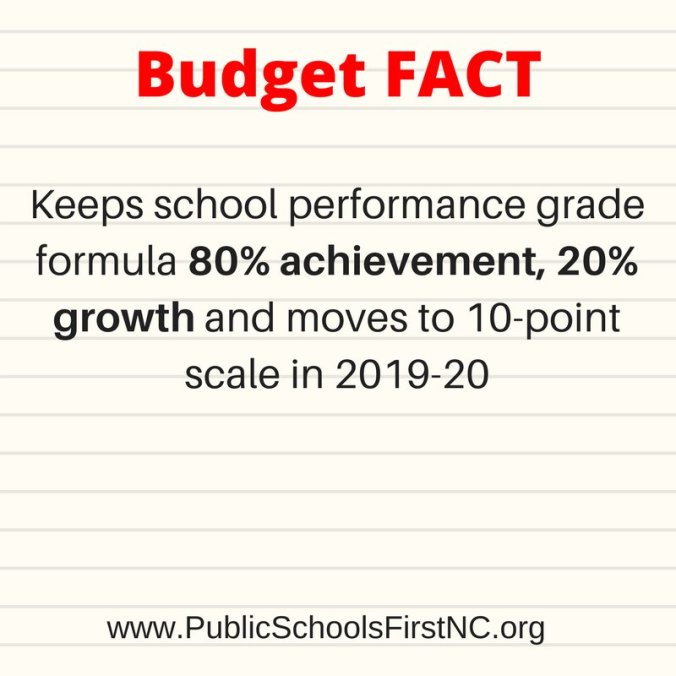 Those school performance grades are the ones based on the model developed by Jeb Bush when he was in Florida. It’s disastrous and places a lot of emphasis on achievement scores of amorphous, one-time testing rather than student growth throughout the entire year.

With the tweet, PSFNC.org also has a link to a quick fact “sheet” about school performance grades in North Carolina. It is very much worth a look on any person’s part, especially public school advocates – http://www.publicschoolsfirstnc.org/resources/fact-sheets/quick-facts-a-f-school-performance-grades-2/?platform=hootsuite. 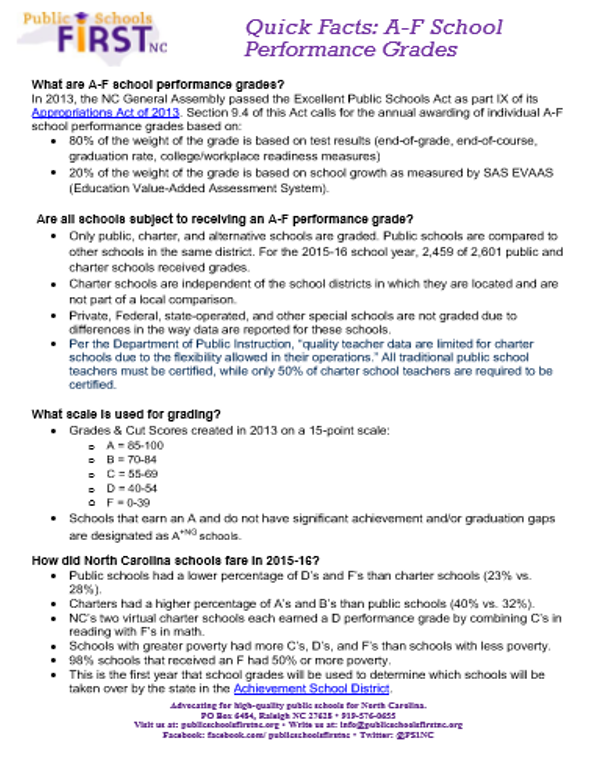 Interestingly enough, in the school year 2019 2020, the school performance grade scale will shift from a fifteen-point scale to a ten-point scale. Do you know what that means?

Guess what else is happening in 2019-2010? Voucher expansion! From a recent budget: