Sen. Harry Brown’s press release concerning his view of Wake County’s request for more state funding was another stellar example of the willful ignorance that many in the NCGA adopt when it comes to funding public schools. 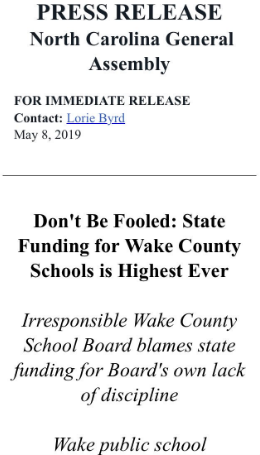 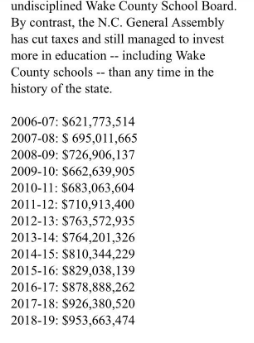 For a lawmaker whose record has been one of passing on unfunded mandates to local school systems like class size chaos and insurance premiums, Sen. Brown makes a pitiful case in his argument by associating costs for public edcuation simply by the number of students in the system.

A system that is one of the biggest in the nation.

Below is the summary of the latest budget proposal from Wake County.

Oh, and Wake County will next school year be paying @ 45,000,000 to the charter schools that they have no control over or are allowed to monitor. Call that some more legislative impact.

These requests make sense. And because Wake County has raised its voices before against the state’s lack of funding, they have become the target of people like Sen. Brown.

Sen. Brown is from Onslow County. It has around 200,000 people. Wake County has over 160,000 students in its schools. If Sen. Brown wants to make this claim, then he needs to prove it – not with worn out rhetoric based on spun data about when the Democrats were in control during the Great Recession, but with real evidence and explanation. The number of students alone is not a good variable. The costs of maintaining the resources used by those students is a better metric.

Until then, this is nothing but an attempt at spewing venom from a man whose hold on numbers seems as tenuous as Sen. Jerry Tillman’s explanation of how well virtual charter schools are really doing.