Legisplaining – (n.) informal – the explanation of a serious social issue typically to voters in a manner that is condescending or belittling.

Eduspeak – (n) informal – terms about education specifically used by people in education but sometimes used by those who have power to legislate educational budgets.

What happens when a lawmaker who has never been an educator begins to talk about public education while presenting himself as an expert on schools to intentionally cloud the issue of public education for political gain? It’s called “Legisplaining in Eduspeak” or what we hear most every day from people in Raleigh when they discuss public education in North Carolina.

No one has perfected the craft of legisplaining in eduspeak more than Sen. Phil Berger who continues to spew forth “strong talk” on his commitment to adequately fund public schools and pay teachers a comparable salary on the national level.

Consider his #NCSuccessStory initiative that began last year in August right before the 2018 elections.

He had a tweet at that same time that said.

“In the last years under Democrats, thousands of state-funded teaching positions had been eliminated, teachers were furloughed and their pay was frozen. Since taking over in 2011, Republicans have focused on significant pay raises for teachers. #NCSuccessStory #NCGA #NCPOL #NCEd”

It’s funny that Berger never mentions that in 2008 we had ourselves a bit of an economic downturn. No one party is immune from criticism, but it is interesting to point out that Berger and his minions really never point to the GREAT RECESSION. No one got raises in any government jobs. McCrory gave raises as state revenue started to gain momentum, but those raises came with a price.

And many teachers voted to furlough days back then – to save jobs for others.

A website appeared on the landscape in 2016 that expanded on the Berger BS and it is being pushed out again for the 2019-2020 school year. Here is the home page for www.ncteacherraise.com. Notice it has the red, white, and blue of the American Flag.

And it a wonderful example of legislaining in eduspeak.

A few questions/concerns arise when first looking at this patriotic website. The first is the banner at the top, “The Truth About NC’s Rising Teacher Salaries.” Nothing could be more antithetical to the truth. Why? Because the very same NC GOP party that created this website also has done or enabled the following in the last six years:

Look at the fine print at the bottom of that initial screen shot.

It says, “This chart compares only state funded base teacher pay and does not account for other pay that generally increased overall teacher pay, including: longevity, performance bonuses, supplemental pay for National Board Certification and advanced degrees, local teacher supplements – which can be as much as an additional 24.5% of state base teacher pay, and a robust benefits package worth an average of $23,629.37 per teacher per year.”

Read that fine print closely. Because it is spin. 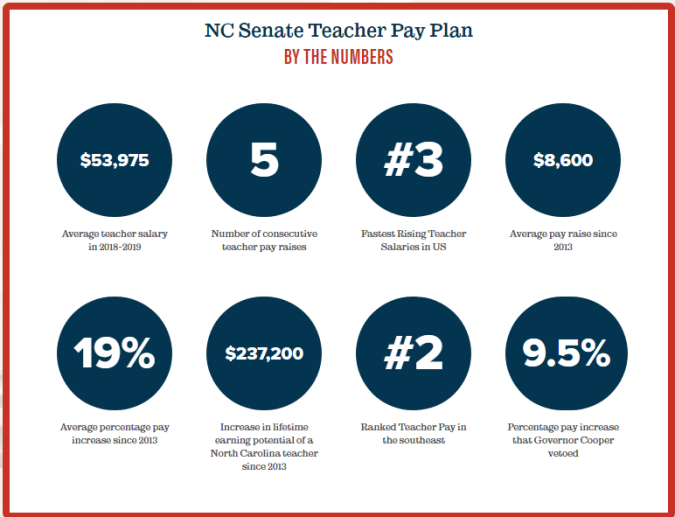 The first chart with the line graph simply says that a teacher in North Carolina will get to the near maximum salary within 15 years of experience. So, what would veteran teachers have to look forward to after year 15? Not much.

It still shows that the highest amount of salary a new teacher will ever make is @ 53,000. That’s terrible. As one sees his/her children grow and want to go to college, the amount of money being netted still amounts to the same. Not many teachers will appreciate making almost the same amount of money in year 30 as he/she did in year 15. And it totally negates that there is no longer longevity pay for veteran teachers, and no longer advanced degree pay or due process rights for new teachers.

And it is comparing it to a plan that was made YEARS AGO.

The second screen shot highlights some spun numbers and explanations of those numbers. Allow for some translation of the information.

There’s also a graphic with links about how past budgets have raised teacher pay.

Remember, that’s an “average” teacher raise heavily given to the lower rungs of the salary schedule. Even Tim Moore said it.

Moore said that previous pay plans focused on teachers earlier in their careers because lawmakers were hearing from the state Department of Public Instruction that those were the ones most likely to leave their jobs. Now, things have changed, he said.

“Now we want to go back and do more for our veteran teachers,” said Moore.

What change was he referring to? Veterans leaving the profession at a higher rate? Makes one wonder why.

A success story? Not really. It’s legisplaining in eduspeak.

Listen to teachers. They know what is really happening.