Today the North Carolina School Board Association held a “Superintendent Candidate Forum” for the two people running to be the republican party nominee for NC State Superintendent. Rep. Craig Horn and Catherine Truitt, Chancellor of WGU-NC,  answered many straightforward questions about funding, teacher-prep programs, school performance grades, and Read to Achieve among other things.

Liz Bell of EdNC.org live tweeted throughout the forum for those not in attendance.

Here is the text from some of those tweets:

“We need to have an excellent teacher in every single classroom across our state,” says Truitt. She says teacher quality will be her North Star in office.

Truitt says NC is not teaching kids how to read w research-backed methods. Says reforming Read to Achieve would be one of her priorities. “Third grade is too late.”

Truitt says fully funding school support personnel is one piece that is doable. She says to dismiss the report just bc it comes from the outside “is disingenuous at best.”

Truitt says she supports some funds for opportunity scholarships bc low-income parents need school choice options like everyone else. Says that current funding is too much.

In 2020, Truitt is calling for reforming Read to Achieve, the need to better recruit teachers, fully funding schools, and revisiting how much money goes into vouchers in this state.

But here are some of the statements she made in 2016 in an op-ed for the News & Observer. 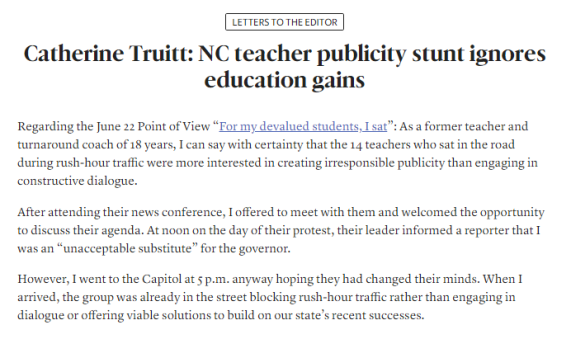 “K-12 education funding has increased by 18 percent under McCrory. In fact, 57 cents of every taxpayer dollar spent goes to fund education. That means that 57 percent of our $22.3 billion General Fund budget is spent on education, compared with a national average of 46 percent. Funding for textbooks and digital resources has tripled under this administration, and we are leading the nation in school connectivity.”

About teacher pay and “recruiting” people to teach:

“Teacher pay in North Carolina is growing faster than in any other state in the country under McCrory’s leadership. Since 2013, North Carolina has invested more than $1 billion in teacher raises, and the budget signed by McCrory increases average teacher pay to more than $50,000 for the first time in state history.”

In an op-ed for EdNC.org that same year, she made these statements:

About what Read to Achieve’s goal:

“He (McCory) also signed legislation that will dramatically increase access to summer reading camps to ensure every student achieves the needed literacy by third grade.”

About the Opportunity Grants:

“In 2014, the governor increased choice for low income parents by enacting the Opportunity Scholarship that provides financial assistance for alternative schooling for students who are not succeeding in a traditional school setting.”

Kristopher Nordstrom, senior analyst for the NC Justice Center, was even more specific in demonstrating the contradictions that Truitt presents in following today’s forum.

Yes, anyone other than Mark Johnson would probably be a huge improvement as far as being the NC State Super is concerned, but Truitt and Horn would be a extension of what has been happening these last nine years to public schools in NC.