This is just a personal opinion, but it must simply suck to be the spokesperson for State Superintendent Mark Johnson and have to “explain” some of the electioneering antics he has used to “promote” himself.

Johnson makes a personal webpage to steer people away from the official DPI site and Graham Wilson has to explain it.

Buy a bunch of iPads without going through proper protocols and Graham Wilson has to explain it.

Procure a “contract” with iStation through surreptitious means and Graham Wilson has to explain it.

Eat some doughnuts and Graham Wilson has to explain why that was good for teachers.

Critics contend the survey is politically  motivated and the questions too simplistic.

Educators are also complaining about receiving email and text messages with the link to the five-question survey.

It was politically motivated. Johnson is running for LT. Gov., and if he was actually serious about making a run for the job, he has done an absolute crappy job of campaigning and fundraising which might explain why he resorted to such blatant questionable ways to “reach” an electorate.

In fact in the last six months of 2019 (when he was playing with the idea of running for LT. Gov.), his campaign raised a little over 14,000 dollars. Five of the thirteen contributions were from family. Four came out of state.

Now that doesn’t negate that Johnson already had money in the coffers from earlier, but the last campaign finance report and lack of an actual “campaign” does seem rather odd if seeking the LT. Gov.’s office is a serious quest.

Concerning the incident yesterday about the text messages to teachers in the middle of the school day, it was not even odd that Graham Wilson respond with a horribly safe answer.

We can OPT OUT. Wow! That’s like someone coming into my house uninvited and then telling me that I could always tell them to leave after the fact.

But Wilson is partially right. We can OPT OUT. In a preventative manner.

Knock Johnson out of the race in the primary. 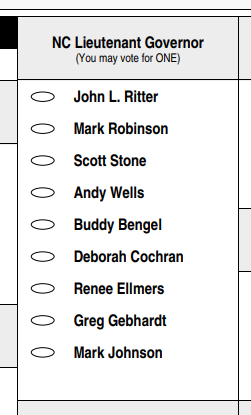