Mark Johnson claims that he wants to change the “establishment.”

But in reality he wants to protect the “establishment.”

In fact, he is the “establishment.” 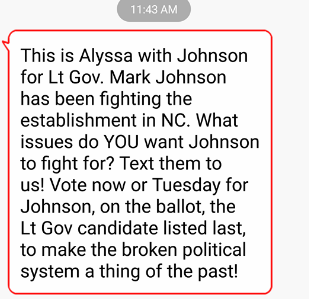 Look at his stint as state superintendent. What Johnson and other business model reformers consider the “status quo” in education is intrinsically linked to a final product, measured by standardized testing and other mercurial measurements. However, the real “status quo” is not really linked to that final product. It is more a reflection of the constant infusion of reform models that have altered the process by which public schools have been able to teach our children. The truth is that the existing state of public education is always being subjected to scrutiny, modification, alteration, and change from outside forces for political or profit-minded reasons. That’s part of the “establishment.”

The real “establishment” is a commitment to flux and change to the variables that measure student achievement and school success by people outside of the actual education process. And in that regard, I do agree that the “establishment” should change.

If anything, the national terrain of public education has been in a state of constant flux for the past thirty years. With the “Nation at Risk” report to “No Child Left Behind” to the advent of high stakes testing to the innumerable business models infused into education to “Race to the Top” to Common Core to charter school movement to vouchers, the thought of even calling what we have had in North Carolina “status quo” is not just wrong, it’s ignorant. And it is purposefully done.

All of that flux was not necessarily brought about by educators as much as by politicians and business leaders – the “establishment.”  Johnson is part of that as he echoes and rubber stamps the very policies and initiatives championed by NC General Assembly GOP stalwarts. The very actions that have caused their version of the“status quo” are allowing politicians to blame public education for failing to hit targets that are constantly moving or in many cases invisible so that “leaders” and reformers can come and claim to save the day and keep the “establishment” in place.

That’s how we get Mark Johnson, the most unqualified state superintendent propped up by a General Assembly that not only has gerrymandered districts and pushed unconstitutional laws, but has spent taxpayer money to help transfer power away from the State Board of Education to a puppet superintendent to privatize the public good of public education even more to protect the “establishment.”

And now he wants to be our Lt. Governor.

A Nation at Risk, No Child Left Behind, Race to the Top, Every Student Succeeds Act, Common Core, SAT, ACT, standardized tests, achievement gap, graduation rates, merit pay, charter schools, parent triggers, vouchers, value added-measurements, virtual schools, Teach For America, formal evaluations – there are so many variables, initiatives, and measurements that constantly change without consistency which all affect public schools and how the public perceives those schools.

He will protect their “status quo.”

So if there is any “establishment” in Raleigh, it has Johnson’s face attached to it.

Yep, he’s right. We do need to get rid of that “establishment.”