Yes, March 3rd is “Super Tuesday” and much of the focus will be on the presidential primaries as states with a much more realistic representation of the electorate will be deciding which delegates will vote for what national nominee.

Yet, the ballot people in North Carolina will see also is full of state office primaries that have direct effect on the single biggest investment we make as a state: public education. Sample ballots where these screen shots came from found here. 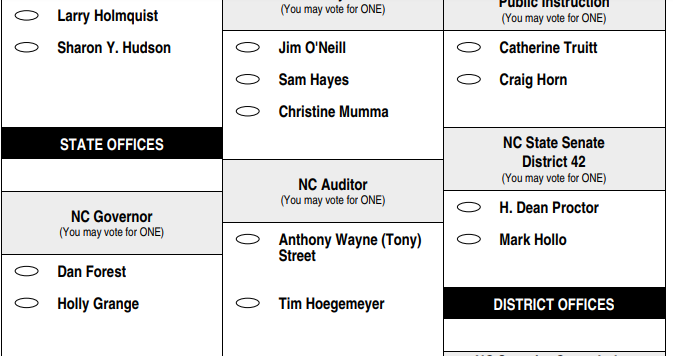 This state is in a budget stalemate over teacher salaries, public school investments, and Medicaid expansion. How these primaries play out may determine the actions of the next session of the NC General Assembly.

The governor’s office obviously has an incredibly big influence on education, not just in being able to veto bad budgets or keeping bad bills from becoming law, but also in who might be appointed to certain positions such as the State Board of Education.

The lieutenant governor sits on the State Board of Education and is part of the NC Senate.

The state superintendent now has more power over DPI and public school budgets than ever before with the passing of HB17 in 2016, a power move by a super-majority at the time in a special session that allowed for the certain lawmakers to have more power over the office and keep the SBOE further away from setting policy.

Every primary for both the NC Senate and NC House will help shape the field for November when people who will decide legislation through various committees that directly affect public education will be elected.

Many localities will be voting on local school board and county commission primaries and if you do not think those are important, then you are mistaken. Public education is funded by state, federal, and local funds. Local officials also are charged with challenging the state when it sees an overreach or unfair mandate given to local school systems. Think “Class Size Chaos.” Local officials also have direct influence over local supplements for teachers which have the power to recruit and retain great teachers.

And don’t forget judicial seats up for election. Many might be surprised how many situations concerning public education had to be decided in the state’s court systems.

Yes, March 3rd is a big day for public education in this state.