Currently she is the chancellor of Western Governor’s University of North Carolina.

Catherine Truitt has a lot of background in NC education. 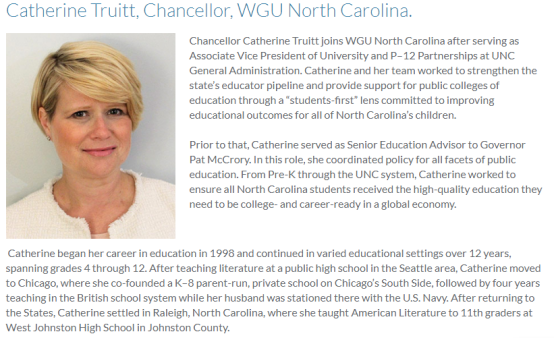 And as the senior education advisor for McCrory, she penned an op-ed posted on EdNC.org on March 25, 2016 entitled “The truth on education spending.”

The claims she made about NC’s “commitment” to public education were slanted at best and received one of the first ever published posts on this blog when it started in March of 2016.

It deserves revisiting as my stance on what she claimed back then has not changed.

I read with great interest and frustration your op-ed that appeared on March 25, 2016 on EdNC.org (“The truth on education spending”) .

While you state that you have been a senior education advisor for Gov. McCrory a “short time,” the arguments that you make to boost Gov. McCrory’s reputation as an advocate for public education have been long overused and are cursory at best. As a teacher in North Carolina for over the last almost 11 years (and 13 of my 18 years as a teacher), I can with certainty state that your arguments only highlight a faint bloom of success, but not the toxic soil that feeds it.

You make several “spun” assertions in your op-ed. Please allow me to respond in hopes that the positives you attempt to point out are actually the opposite and are actually real problems that the governor has helped foster.

“The truth is, total K-12 funding has increased each year of Gov. McCrory’s administration and North Carolina now spends 57 percent of its state budget on education, far higher than the national state average of 46 percent.”

This is the same argument that Rep. Hardister made on Sept, 3rd, 2015 on his blog The Hardister Report (http://jonhardister.blogspot.com/2015/09/public-education-funding-whats-truth.html). He talked of three sources of financing for NC public education – federal, state, and local. You are right; 57 percent is far higher than the national average. But that’s because it is supposed to be. The state constitution declares it.

The Public School Forum of North Carolina’s publication the 2014 Local School Finance Study provides a great history of the state’s practice in funding public schooling which is rooted in the proclamation that all children in the state ages 6-21 are guaranteed a good public education. The rest of my explanation to him can be found at this link, http://pulse.ncpolicywatch.org/wp-content/uploads/2015/09/Letter-to-Hardister.pdf.

However, I do want to point out that before we had a “Republican governor and a Republican-controlled legislature,” the state spent an even higher percentage on public education because THAT IS WHAT THE STATE CONSTITUTION DECLARED. As I stated to Rep. Hardister,

“…those percentages of spending are not a badge of honor that this General Assembly gets to wear; it was earned many decades ago. The fact that the percentage is getting lower actually is not a positive sign for this administration. It is a reflection that the NCGA’s level of commitment to public education is wavering. Since most of the state funding goes to salaries of certified and classified employees, the fact the percentage of funds from the state is not higher than it was in years past is indicative of the stagnated salaries NC gives to teachers and assistants. With the elimination of funds for professional development and talk of cutting numbers of teaching assistants, how can you brag about the level of money spent on public schooling?”

Also lost in this is the uneven fashion in which money from the state is actually dispersed to LEA’s on the county and city levels. One of the more cohesive explanations of North Carolina’s state funding practices is a publication by the Center for American Progress entitled “The Stealth Inequities of School Funding” produced in 2012. It summarizes our state’s practices in a fairly concise manner, especially on page 46.

The statement you make about teacher salary is the most recycled, spun statement used by West Jones Street concerning public education in the last three years. You state,

“Teacher salary raises enacted in 2014 reversed the pay freezes that were enacted under Gov. Beverly Perdue shortly after she took office in 2009. In fact, the 7 percent increase in average teacher salary between the 2013-14 and 2014-15 school years was the largest teacher pay raise in the entire nation.”

First, Gov. Perdue and the NCGA at that time (2009) froze salaries and salary schedules because of the GREAT RECESSION. I think almost every business (in every state) froze their salaries; many even lowered them. Less money in people’s pockets, less money in state coffers. I, for one, was grateful to still have a job during that time. But ironically, why didn’t the governor just reinstall the salary schedule that was in effect in 2008 when he came into office after Perdue if he helped to guide us out of the recession? I surely would be making a lot more than now.

Secondly, you use that magic word – “average.” When Brenda Berg, CEO of Best NC made that same claim as a positive for NC, I responded with an explanation that has been made many times by many people. I stated in an August, 2015 open letter printed on EdNC.org (“A teacher weighs in on the war on public education”),

“The operative word here is “average.” Beginning teachers saw an average pay hike of over ten percent, yet the more years a teacher had, the less of a “raise” was given. The result was an AVERAGE hike of 6.9 percent, but it was not an even distribution. In fact, some veterans saw a reduction in annual pay because much of the “raise” was funded with what used to be longevity pay. And as a teacher who has been in North Carolina for these past ten years, I can with certainty tell you that my salary has not increased by 6.9 percent.

Mr. Hogan’s (James Hogan) claim that there was only an average salary increase of $270 comes when one takes the actual money allocated in the budget for the increase and dividing that evenly across the board.

That raise you refer to was funded in part by eliminating teachers’ longevity pay. Like an annual bonus, all state employees receive it—except, now, for teachers—as a reward for continued service. Yet the budget you mentioned simply rolled that longevity money into teachers’ salaries and labeled it as a raise. “

You state that the governor is championing “transformational measures” to make NC’s schools the best in the nation. You state,

“For example, North Carolina is on track to be the first state in the country to connect every classroom to high speed wireless Internet. This development will enable a wide range of personalized learning applications for all North Carolina children and has the potential to transform the way students learn.”

Interestingly enough, when politicians talk of personalized learning through technology, this veteran teacher (and many others) hears that you want to make the learning experience more virtual than realistic, specifically through virtual charters and academies.

I do understand that many students have circumstances where technology can help alleviate problems and open avenues for learning. My own son, who happens to have Down Syndrome, is a very visual learner. Technology has been huge for him when it is facilitated by a professional educator. However, when you put in technology for technology’s sake (with an already biased “positive” view of for-profit virtual schools), then your claim seems more like a plug for buying more computers and software and divesting from the human capital that really drives the dynamic learning experience – the student/teacher relationship.

“The budget he signed provides funds to reduce class size in first grade to one teacher per 16 students by 2016-17. He also signed legislation that will dramatically increase access to summer reading camps to ensure every student achieves the needed literacy by third grade.”

Let me refer to the Allotment Policy Handbook FY 2013-14 on guidelines for maximum class size for all classes. There is a table from p.26 that gives some guide lines to students per classroom. However, local authorities can extend those class sizes if there is a need in their eyes. If you look on the very next page of the same handbook there is a reference to the use of provisions according to HB112.

That bill referred to, HB112, allowed the state to remove class size requirements while still allowing monies from the state to be allocated based on the previous table’s numbers. And that’s huge! I rarely have a class that is at or below 29 students. Some classes on my campus push upwards to 40 students.

Another detail to emphasize is the change that some districts have taken to move away from the 6/7 period day to block scheduling. Take my own district for example, the Winston-Salem / Forsyth County Schools. When I started ten years ago, I taught five classes with a cap of 30 students. With the block system in place, I now teach six classes in a school year with no cap. The math is simple: more students per teacher.

So, you claim that putting a cap on class size for one of the twelve grades is a positive? My own son’s class for developmentally delayed children has well over a dozen students in it. Would the governor help cap those classes as well to help in those situations? I will partially believe it when my son’s teacher sees it. I will fully believe it when all classes have caps.

“In 2014, the governor increased choice for low income parents by enacting the Opportunity Scholarship that provides financial assistance for alternative schooling for students who are not succeeding in a traditional school setting.”

Allow me to use the explanation I offered in a recent Winston-Salem Journal op-ed I wrote in February (“Defending public education”) against the use of Opportunity Grants which at a maximum of $4800 does not even cover one semester in a competitive, private school that can reject any applicant without explanation. I stated,

“One can argue that the Opportunity Grants can help alleviate high tuition costs, but if the grants are targeted for lower income students, then how can those families even think about allotting their already limited funds for a private education, especially when NC has refused to expand Medicaid services for many who would qualify to obtain an Opportunity Grant? That’s not really giving families choices.

If you scroll down on the North Carolina State Education Assistance Authority website for the Opportunity Scholarship and click on the link called “Current List of Nonpublic Schools”, you will find a list of schools participating in the grant program. Notice a vast majority of those schools have religious affiliations. Ironically, many of those schools are already supported by churches that do not have to pay taxes. And now those entities are getting more taxpayer money to support curricula and processes that are not even regulated like those of public schools?”

Furthermore, if you think that it is necessary for funds to be given to people to get them a good education, then why not invest that very money in the very public schools you are constitutionally supposed to support to help those very students succeed in their public schools?

“Gov. McCrory recognizes the role the state’s community colleges play in giving North Carolina citizens the skills they need to prosper in a 21st century economy.”

First, it helps that we have a strong public school system that gives a strong foundation of learning and academic skills for those who enter the community college classrooms. But there has to be jobs for these citizens to use their skills.

Look at the list of businesses, companies, and corporations that have disavowed the governor’s signing of HB2, the most discriminatory piece of legislation in recent memory which ironically was signed merely hours before your op-ed was published on EdNC.org.

This is an election year, Ms. Truitt. Your boss is embarking on a re-election campaign that daily is coming under fire for his very lack of leadership. As teachers and voters, we need to be able to see substance to your arguments, not airy claims.