When Pat McCrory was governor, the GOP super majority changed budget protocol and made the state budget a biennial process. In an odd-numbered year, a budget is set forth to encompass the next two fiscal years. Amendments to the budget can be made in even-numbered years. Furthermore, if a budget is not passed, then the state automatically reverts to the previous budget’s recurring spending levels.

More specifically (from the NC Budget and Management site): 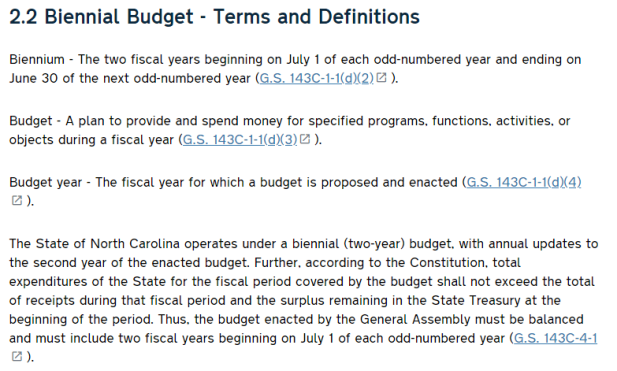 So, when someone like Phil Berger tries to frame the narrative that Gov. Cooper and NCGA Senate Democrats placed teachers on the chopping block because they upheld a veto on what was presented as a 3.9% average raise in teacher salaries, he is not really being thoroughly forthcoming.

In fact, it is a gross misinterpretation of the reality.

On the surface, what Berger & Co. still claim to the public is that teachers will not get a 3.9% average raise because of Gov. Cooper.

But many people forget that when budgets are written for the state, they are biennial budgets: two-year budgets.

When teachers were said to be getting a 3.9% pay raise in “this budget,” it meant it is over a two-year period. That “full” raise would not be occurring immediately. Plus, any budget  can be amended in a future session to offset anything passed in the previous summer.

Step increases based on seniority according to that tweet above are also part of the “raises.” The issue is that those step increases have already passed in a mini-budget bill this past fall.

Lawmakers in the Senate Thursday passed what’s known as step increases for teachers.

It’s basically a bonus. For each year you’ve been a teacher, you’ll get about a $100 step increase up until a certain point but some are worried it’s not enough.

Lawmakers have been passing these ‘mini budgets’ since Governor Cooper vetoed the full budget, months ago.

That makes that whole narrative of leaving a 3.9% raise on the table even more misleading.

What Cooper and Senate Democrats vetoed was based on the last graphic there.

Throw in some inflation, some cost of living  increases, higher health care premiums, and… well, you get the picture.