It’s May 1st. Six months away from an election. And as you know, Forest has been campaigning to be governor for years. But look at the text of the tweet:

“If this same trend exists in NC, the Governor has no moral, ethical or rational justification for his current strategy.”

That’s a hell of a thing to say because I wonder if the Lt. Gov. even read the article he is tweeting out. It is from Bloomberg News. 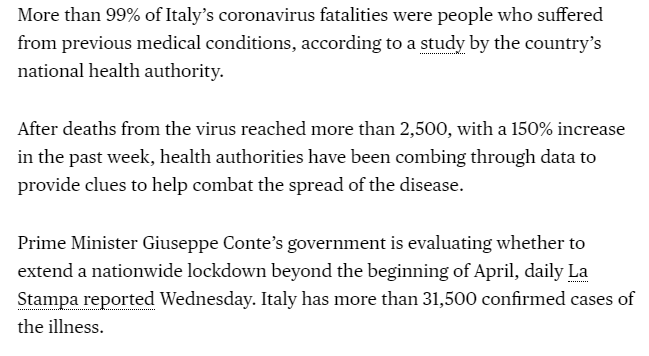 2,500 deaths from 31,500 confirmed case. Forest might want to see what the numbers are now. As of a few minutes ago, this was what Johns Hopkins Coronavirus Resource Center reported:

With all that has happened in the weeks since the original report in Bloomberg, if  this “trend” was true then it would have been widely reported now?

But Italy has national health coverage and easier access to medical care. North Carolina didn’t even expand Medicaid – a decision that Dan Forest has supported. To think that everyone walking around in NC even knows any or all of his or her preexisting  medical conditions  is rather ignorant.

Makes one question if Forest has the “moral, ethical or rational justification” for misrepresenting what is happening.

Oh, and if that trend Forest refers to was “true” now, then Italy would have opened up a long time ago.