On EdNC.org today, Republican candidate for State Superintendent published an op-ed entitled “Cutting through the noise of education reform and COVID-19.”

As the current “chancellor for WGU NC, an online, nonprofit university with 3,800 students in North Carolina,” it is not surprising that she take the opportunity to pen this perspective to talk about online learning and the need for change in NC from the status quo. Even Jeb Bush published an op-ed in the Washington Post yesterday about changing the educational landscape to more of an online platform. Of course he would say that; he’s trying to profit from all of this. Bush is one of the biggest privatizers in the entire country.

What is a little surprising is that Truitt is part of that very status quo she seems to be talking about. Either she wants us to forget some things she has said or championed in the past or she has completely forgotten.

Truitt makes some assertions that really are not fleshed out enough and she certainly does not offer any real concrete plans on how to tackle them. First is the reference to the NAEP test results from this past fall.

“This past November, all U.S. states received their 2019 reading and math NAEP results. Known as “the nation’s report card,” NAEP scores are the only apples-to-apples comparison of student achievement by state in math, reading, science, and civics, among others.

Given every two years to a sample size of 600,000 fourth and eighth graders, state education leaders look to NAEP results to determine if legislation or initiatives are leading to improvements over time.

I’ll cut to the chase: in North Carolina, the answer is “no.”

If Truitt is going to look at the NAEP as a good measurement of student progress, then she has to admit that the results say a lot about Phil Berger’s Read to Achieve initiative. From Last Oct. 30th’s News & Observer:

North Carolina’s reading scores are now lower than before the state launched a major effort earlier this decade to boost literacy skills for young children, according to the latest round of national exams released Wednesday.

In 2012, state lawmakers created the Read To Achieve program to try to get more students reading at grade level by the end of third grade. But results from the 2019 National Assessment of Educational Progress, known as the nation’s report card, show that both reading scores and the percentage of North Carolina students displaying at least basic reading skills is now lower than in 2011.

Those results are also reflective of policies that were put in place under Pat McCrory’s tenure and in an op-ed on EdNC.org in 2016, she had nothing but praise for those policies. 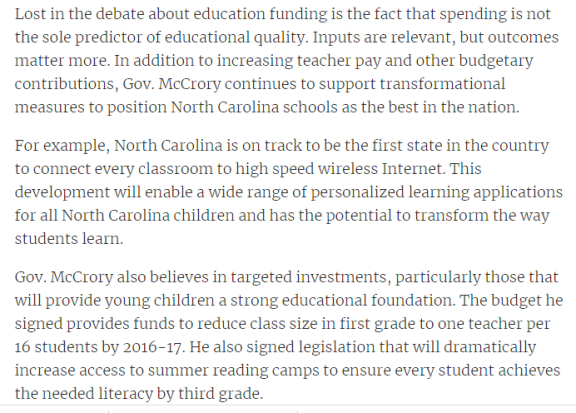 We were not prepared for remote learning despite a decade of innovation initiatives and pilot projects spanning Democratic and Republican administrations, and general agreement within the education community that personalized learning enabled by technology is a good thing.

Remember her current job with Western Governors University.  WGU-online is relatively new to this state, but has been around for a while in the country. The U.S. Dept, of Education has on its College Scorecard site the following profile of WGU.

But here’s the part that smells the worst in this op-ed:

We were not prepared for remote learning despite a decade of innovation initiatives and pilot projects spanning Democratic and Republican administrations, and general agreement within the education community that personalized learning enabled by technology is a good thing.

That term “personalized learning” has become a bit of a buzzword in North Carolina – a fashionable way to possibly veil an educational reform under the guise of something altruistic. (Oh, and there really is no general agreement on personalized learning through technology).

In its literal and denotative form, “personalized learning” seems a rather noble concept. It would allow students to receive tailored-made lessons that match their learning styles, needs, and interests.

In November of 2017, Benjamin Herold of Education Week wrote an investigative article entitled “The Case(s) Against Personalized Learning.” It is a straightforward look at how the amorphous term of “personalized learning” has been used to actually advance agendas that really are not good for enhancing instruction when enabled by technology. Specifically, he uses three arguments against “personalized learning.” They are:

If what Truit is trying to accomplish with this argument for “personalized learning enabled by technology,” then does it not make sense that she would have to counter the arguments laid forth by Herold?

And why specifically counter those arguments now? Because she’s running for the offie of the top public school official in the state.

One of the many people whom Herold refers to is Alfie Kohn, a heavy-hitter in the world of educational thought. He quotes Kohn from his book, Schools Beyond Measure.

Alfie Kohn’s work as an author and critic is known the world over. In fact, his book The Homework Myth is one of the choice reads for my AP English Language and Composition classes (which ironically argues against the veracity of AP classes in general).

In February of 2015, Kohn wrote an entry in his blog entitled “Four Reasons to Worry About ‘Personalized Learning.’” In it he outlined four warning signs:

1. The tasks have been personalized for kids, not created by them (not really student-centered).
2. Education is about the transmission of bits of information, not the construction of meaning.
3. The main objective is just to raise test scores.
4. It’s all about the tech.

I believe Kohn more than I believe Truitt. In fact, Kohn actually shows his research if you look at the actual post.