By now many of you have heard or read about the damning state audit report of DPI for the 2019 year that found some rather gross negligence of tracking federal grant money. Of course, Mark Johnson deflected all responsbility to others.

It’s never his fault. Yet, hours after that report came out, the Chief Financial Officer for DPI abruptly retired. From WFAE’s Ann Doss Helms:

The state auditor’s report on DPI was posted Thursday, after months of private talks between auditors and education officials. It listed seven problems with the department’s oversight of federal grants, including one that could cost the state $18 million that could otherwise be spent on special education. 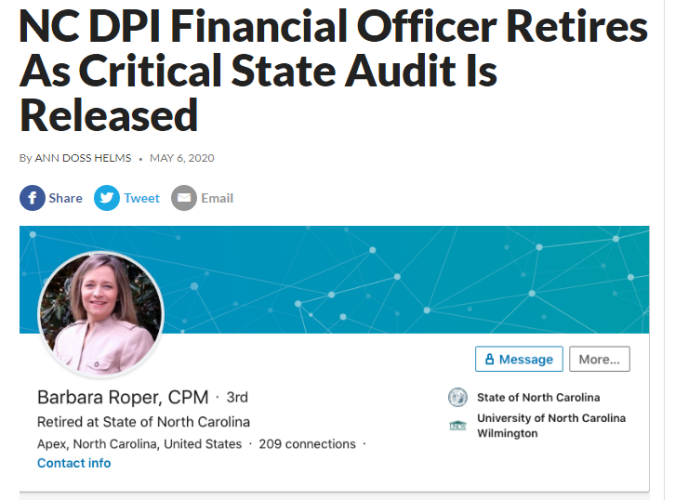 Helms’s report reiterated what Johnson in his first response to the audit.

On Friday, Superintendent Mark Johnson blamed some of those problems on a previous chief financial officer hired by the Board of Education, and said the CFO he hired in 2018 is fixing the problems.

“I took over as head of the agency in the middle of 2018 and immediately started making the changes that the agency desperately needed to end some of the systemic dysfunction that had plagued this agency for years,” Johnson told WFAE on Friday.

What Johnson didn’t mention was that Barbara Roper, the officer he hired in September 2018, was retiring as he spoke.

I wonder if he found out about it by a secret note passed under the door of an anonymous high-ranking official at DPI like with the iStation debacle.