“Lions, and tigers, and bears! Oh, my!” – Dorothy, Tin Man, Scarecrow from The Wizard of Oz.

As the North Carolina General Assembly is about to convene for the long session here in the new year, it bears repeating that public education will again be at the center of many of the very items of the agenda.

With a challenged bill in the court system now concerning the power of a neophyte state superintendent, a blind commitment to an ASD school district, more charter school disruptions, and a voucher system that is slated to  take almost a billion dollars of tax payer money in the next decade it is important to bring light to a couple of reports that have surfaced this week.

First is the Annual Charter Schools Report to the NCGA, of which a draft has been released (https://simbli.eboardsolutions.com/Meetings/Attachment.aspx?S=10399&AID=79615&MID=2933) .  According to Billy Ball of NC Policy Watch, the report says,

“According to the report, charters’ percentage of students classified as “economically disadvantaged” remains significantly lower than their traditional public school peers (see page 9).

In 2015-2016, for instance, less than 30 percent of charter students were counted as low-income, far below the 50.2 percent counted in traditional schools.

Additionally, charters’ share of low-income children has been consistently on the decline since  it reached 39.6 percent in 2012-2013, at at time when traditional schools’ have reported fluctuations up and down.

The numbers were prepared by the state’s Office of Charter Schools, which oversees the state’s growing charter school sector” (http://pulse.ncpolicywatch.org/2017/01/03/state-report-n-c-charter-schools-work-fewer-low-income-children/#sthash.JC3kSKYF.dpuf).

In fact, the table on that very page 9 looks like: 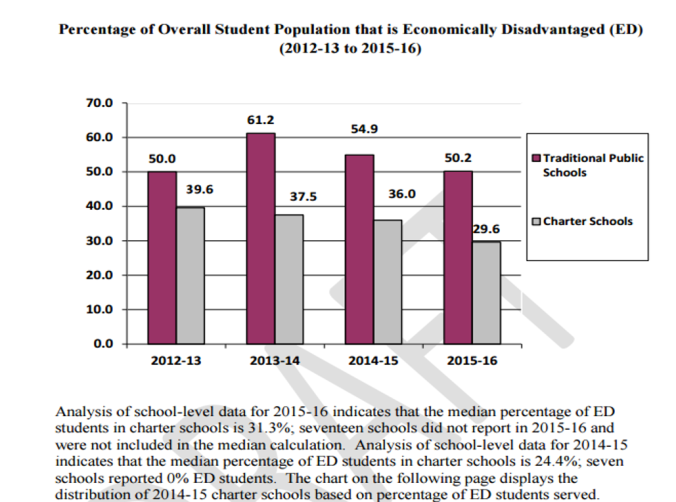 In fact, it seems that the number of “economically disadvantaged’ children serviced by the charter schools has gone down over the years.

Remember last year when Lt. Gov. Dan Forest asked DPI to redo a report on charter school because it did not reflect so well on their servicing of students of low income? I do.

Ball concludes his report with,

Interesting. So much for consistency.

Lindsay Wagner of the AJ Fletcher Foundation published a very interesting and insightful article on the voucher system here in North Carolina today. An experienced researcher and educational journalist, Wagner has witnessed the evolution of the “reform” movement first-hand here in North Carolina and this article deserves your reading.

It is called “North Carolina’s school voucher program: an accountability and transparency wish list for 2017” and you may find it here: http://ajf.org/north-carolinas-school-voucher-program-accountability-transparency-wish-list-2017/.

Wagner then gives a realistic “wish list” and explains why lawmakers who enable the voucher programs to work so surreptitiously should be more transparent with taxpayer money. That’s especially important when much of that voucher money goes to religious schools that can alter both curricular standards and admission policies.

And then we have school choice, one of the most nebulous terms of the current school reform movement. Books are being written about school choice and we have a president elect who is in favor of school choice who has nominated a woman who herself is a champion of school choice, charters, and vouchers by the name of Betsy DeVos.

Dr. Diane Ravitch on her iconic blog which to date has almost 30 million hits responded to a recent Washington Post editorial concerning school choice, vouchers, and charters by kindy referring to places where school systems have literally been destroyed by “reform” (https://dianeravitch.net/2017/01/02/a-wake-up-call-for-fred-hiatt-editorial-page-editor-of-the-washington-post/).

And now there is news out of Tennessee that their Achievement School District is having some “problems.”

Are those flying monkeys I see on the horizon?