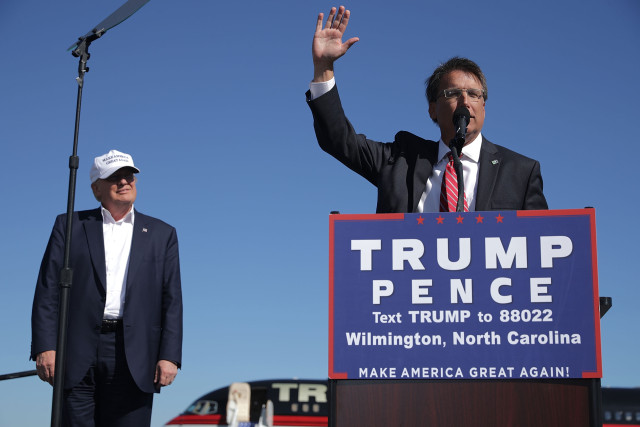 I read without surprise in the past couple of months that you have had a little more than a hard time obtaining gainful, full-time employment since your last day as governor of our state.

No doubt many potential employers in North Carolina are hesitant because of your role in passing and defending the controversial “bathroom law” otherwise known as HB2.

Even you have made such an admission. For instance, there was the News & Observer report on March 13 by Colin Campbell entitled “McCrory, working as consultant, says HB2 makes some employers ‘reluctant to hire me’” (http://www.newsobserver.com/news/politics-government/state-politics/article138266443.html#storylink=cpy).

Former Gov. Pat McCrory says the backlash against House Bill 2 is making some employers reluctant to hire him but he’s currently doing consulting and advisory board work.

McCrory has been appearing frequently in interviews with national media outlets to defend the controversial LGBT law, but he hasn’t announced what’s next for his career. In a podcast interview recently with WORLD, an Asheville-based evangelical Christian news website, McCrory talked about his challenges on the job market.

The former Republican governor says HB2 “has impacted me to this day, even after I left office. People are reluctant to hire me, because, ‘oh my gosh, he’s a bigot’ – which is the last thing I am.”

Well, there will be many who will always judge you by that one ill-fated bill. And you did have every opportunity to veto it and not sign it into law. But you did and you did a rather bad job of defending it to the rest of the country and even the world.

There is a reason that over 20,000 voters who voted for Donald Trump in North Carolina did not vote for you. Well, maybe there’s more than one reason. History will tell.

But as far as being unemployable beyond the “consulting” realm is concerned? I think I have a solution.

I know. It sounds a little “out there.” But you might actually be ready for it. Think about it and imagine…

But maybe the primary reason for this possible venture is to see the real effects that our state government has had on public education and the students who attend those schools – effects that either you allowed and/or even abetted.

It also might give you the incredible opportunity to maybe actually become that which you always claimed you were – a public servant.

Maybe after your tenure as a substitute teacher, you could then become a true advocate for public schools. Maybe start focusing on the Charlotte-Mecklenburg School system. Considering the possible effects of HB13, HB800, and HB514, your hometown is literally becoming a breeding ground for “reformist” agendas that seek to reinstitute segregation.

But then again, I am only making a suggestion.