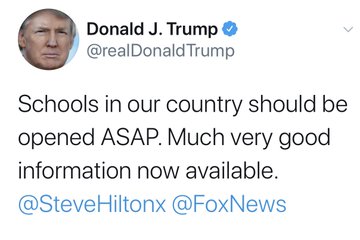 Yes. A lot of people are wanting schools to open up again in the fall on schedule which is a tad bit ironic in that we are still in the 2019-2020 school year. We still have at least 11 weeks until the school schedule for most NC traditional public schools is set to begin the 2020-2021 school year.

This week marks the beginning of the 11th week of remote learning. Lots can happen between now and August: peaks, phases, curves, breakthroughs, resurgences, AND THE NEED FOR VIABLE PLANS. MULTIPLE PLANS.

The words “As soon as possible” should not associated with opening up something that brings as many people together in a confined space with the contagious nature of something that can easily be spread to others in homes and other places unless another “ASAP” is involved.

As Safe As Possible. That is not the “ASAP” that Trump was talking about.

No where has Trump ever said he would boost funding to help schools set up plans and enact the to keep as many people safe as possible.

And the “much very good information now available?” From shining light under the skin to using bleach to taking an unproven drug used primarily for malaria to not recognizing that almost 100,000 people have died to being a nation nowhere near testing levels to even know how big the epidemic is, it would be hard to believe what he has to say about the nature of coronavirus.

Or any other politician or pundit who says we just need to open schools because… well, because.

If you are a politician or public figure who says something like the tweet above, then you should be the first parent to send your child to a public school when doors open for classes that have more than 30 students in them that do not even have the funds to give every student a book for each subject.